I asked my friend Tania Arpa, designer of the awesome international covers for the Interim Goddess of Love trilogy, some questions about covers: 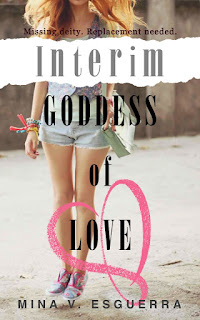 Did you and (photographer/model Rhea Bue) plan the cover together? How did you collaborate on it?
We got together for lunch and talked about the book and what I had in mind for the cover photo. We talked about where the photos might be shot, and how.

What other ideas did you two come up with that didn't make it to the final?
For the photos? An underwater shot! And also a photo taken from the top of a cliff overlooking the ocean. They were just too hard to do. 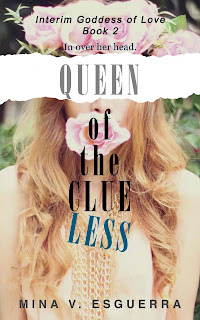 How do you come up with your cover concepts?
After I read the book, I try to figure out the theme of the story. Then I'll remember scenes that are significant and try to picture each of them as a book cover. I also think of the protagonist and think of a photo of her that best illustrates her state of mind of her emotional state during some point in the story. I try to work from all of these.

How long did it take you to come up with the covers?
It took me either weeks or hours, depending on how you look at it. I start conceptualizing after reading the book, then when the photos come in, I visualize what I can do with them. The work on Photoshop takes an hour or two. I play around with fonts, photos, layout. I look at each design draft and ask myself questions like "Is this an honest portrayal of the story?" "Will this cover appeal to someone who will enjoy the book?" "Will this look good both on a paperback and as a thumbnail when it shows up on an amazon search?" Stuff like that.

It took a shorter amount of time to design the cover of Icon because the general layout was pretty much predetermined -- it had to be similar to the covers I made for the first two books. I just needed to tweak it a bit for the photo I was going to use. 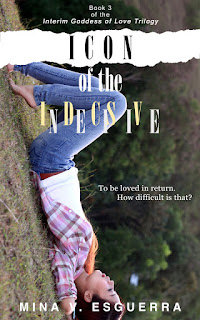 How many photos did you have to choose from? How involved are you in how the photos turn out and what you get?
For Icon, Rhea gave me four photos to choose from, all taken from the same shoot. I picked this one because I'd always wanted a cover with Hannah lying on the grass being all contemplative. It seemed like something she would do. She wouldn't care about getting her outfit stained; she'd lie there and think about what in heavens she's gotten herself into. I never mentioned this to Rhea, so it's either serendipity or, more likely, she got that vibe about Hannah too.

Sometimes, like in the case of IGoL and QotC, I get photos that weren't originally intended for the cover. Rhea's photos were perfect for IGoL and QotC because while the photos were meant for her style blog, they had a touch of the surreal, and a bit of humor. So I just picked out the two photos I wanted to use and incorporated them into the design I was working on. I of course just needed to make sure they shared the same layout theme because they were two books of a series.

For Icon, although Rhea and I discussed the story and what I had in mind for the cover, she did the shoot herself and just sent me the photos she thought I'd like. I think it was better that way. I don't like looking over another artist's shoulder while they work, the same way I prefer being given creative breathing space while I work. I'd seen Rhea's portfolio so I was confident she'd come up with something great. And she did!

Tips for how an indie author in the Philippines can score a really cool cover please?
Hire me! And hire Rhea to do the photography. Haha. I think, for an author, the best place to start is to develop an eye for book covers. You don't necessarily have to know how to make one, but you should have an idea of what a good cover is and how book covers relate to the story and how they help sell your book (a while back, I blogged about how book covers are a marketing thing). Once you do, you're more likely to pick a cover designer who is good, and who can give you what you need. Don't choose the best artist you know. There are a lot of artists who are brilliant at painting and graphic design but can't design book covers. Choose an artist who loves and understands books and knows what should go in a book cover. Someone who knows what fonts not to use because you won't be able to read the title when it shows up as a thumbnail on a Google search. Also, it helps if you come up with a great tag line to give to your book designer. Sometimes a tagline will inform the theme of the cover design. However, sometimes the design will give you an idea for a tagline (I think I got the idea for the IGoL tagline while making mockups for that cover). Be open to possibilities.

Tania (blog.taniaarpa.com) and I are collaborating on other cover projects. Contact her to plan your awesome cover too. :)
Posted by Mina V. Esguerra at 11:31 AM

Email ThisBlogThis!Share to TwitterShare to FacebookShare to Pinterest
Labels: covers, icon of the indecisive, interim goddess of love, queen of the clueless, tania arpa

Subscribe to get all these and future lessons (PDF, mp3)

Author at Once: Choose a publisher training schedule
Read me on Wattpad

If you've read my books or recommended them to others, please answer this survey! There may be random prizes. :)

Promote Your Page Too Tweets by @minavesguerra